This week, I’ve been mostly thinking about ASSIST Sheffield, an organisation dedicated to providing support and sanctuary for those seeking asylum in South Yorkshire. On Thursday night, it was the launch of Verse Matters in Leeds – an anthology edited by me and Rachel Bower and sold in support of ASSIST, featuring first-time published writers alongside more established authors such as Hollie

McNish, Liz Berry and Malika Booker. Rachel Bower (founder of the original Verse Matters collective, a poetry night which has consistently given a platform to unheard stories from the city) read Syrian-born Bashar Farahat’s poem in which his mother gives him advice (‘fight for a woman, don’t fight for a king’) culminating in the stark plea ‘don’t die’. She also read Mimi Mesfin’s poem translated from Amharic and dedicated to her mother.

On Saturday night, I was invited to think again about sanctuary and trust and the work of ASSIST at a performance of new play Paradise Road written by James Stone and staged at Sheffield’s Library Theatre. The drama is a powerful, taut, uncomfortable exploration of how we view strangers. Affluent Londoners Helen Hutchinson (a forensic scientist) and Richard (a novelist) agree to host Iraqi couple Vartan and Sabelle Sarafian after learning that the pair have had to first flee their home in Mosul and then a temporary camp. The early scenes evoke the awkwardness of encountering people we might perceive as ‘other’: the burden of gratitude, the initial politeness, the fear (on both sides) of imposition. 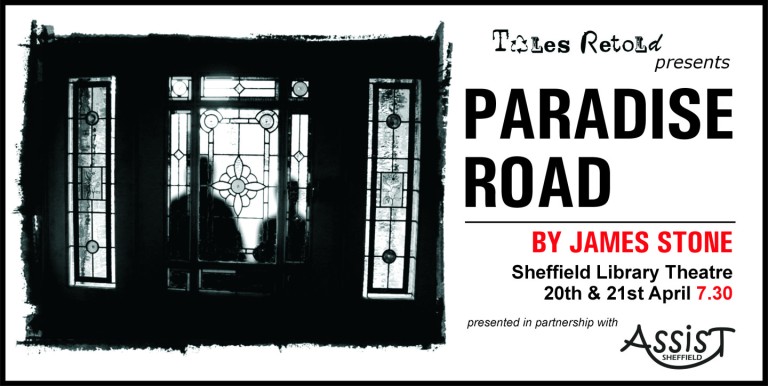 As the challenges of sharing a space grow, we learn more about the cracks in Helen and Richard’s relationship – they can’t have children and whilst Helen becomes engrossed in her work, Richard obsesses about finding a publisher for his novel and watches hardcore porn in the kitchen. The couple begin to notice strange things about their well-educated, polite guests too: Vartan easily acquires a laptop and the couple are able to get work remarkably quickly. A mysterious van begins to park outside the house, an intruder is seen. As relationships between all four of them become increasingly complex, Richard and Sabelle start an affair and she becomes pregnant. At intervals throughout the piece, tape recorded police interview footage with Helen is played, hinting towards a dark conclusion. There are countless red herrings and planted suspicions and the play resists easy resolution.

After the performance, the actors and writer made themselves available for questions. As a playwright fresh from the experience of developing a script last autumn with audience input, I was expecting a lively debate of the kind we had after Medusa where my depictions of sexual assault, victim-blaming and pornography were sometimes questioned. This Q&A was much more mellow and I would have welcomed a deeper interrogation of the play’s themes (but did I speak up myself? No!). The most obvious challenge that might be levelled at Paradise Road is that it presents a rather bleak picture of what might happen to someone welcoming an asylum seeker into their home. But I completely bought James Stone’s defence: his intention was to show that all people can be infinitely complex and surprising, regardless of where they’re from or what they’ve been through. Trust is difficult to achieve.

If I had a problem with Paradise Road, it’s that it feels like a brilliantly-executed thriller which happens to use the dramatic premise of housing asylum seekers rather than a play primarily about trust and our perceptions of others. I couldn’t help visualising a much more subtle exploration of the tensions in which – for example – Sabelle did not become pregnant with Richard’s child but the notion of an infidelity was instead suspected. A play which I would have preferred but I’m sure countless others wouldn’t have!

One aspect of the drama which grated on me a little was the portrayal of women’s sexuality, which seemed almost exclusively connected to their fertility. Early in the play, Richard refers to Helen’s ‘hostile womb’ and we learn that she’s imposed a sex ban (only regaining interest, ironically, when Richard begins his affair with Sabelle and Helen unwittingly remarks on his increased attractiveness). Sabelle, meanwhile, confesses to having cheated on her husband in the camp with a man who was ‘good with children’ and she seems to start falling for the otherwise unappealing Richard after he talks fondly about his young nephew. It would have been interesting to see women’s desires explored in more nuanced and challenging ways. I was also unconvinced that Richard – a man who leaves his socks on during sex and launches into a post-coital monologue about the importance of them being ‘very very careful’ – would risk having unprotected sex with Sabelle, knowing that she and her husband have been trying for a child. Sex occupies a strange position in Paradise Road. In the world of the play, men watch porn and express ideas of ownership over women’s bodies and women fantasise about pregnancy. I couldn’t help but imagine alternative, more interesting treatments. But – I concede – this isn’t a play about sex (despite it figuring so crucially in the narrative).

This is a very crude and unfair summary of a play which deserves a far longer discussion. The acting was excellent (Edd Bower got the short straw with the rather 2D Richard, I felt – I’ve met a few self-pitying male novelists, but at least they’ve offset their solipsism with extreme charisma!), the script was razor-sharp and the plot was compelling. Paradise Road has scope to start important debates and I hope there are opportunities for it to do so and that – crucially – space is made for many voices to have an input. It was welcome to see a representative from ASSIST on the stage on Saturday and I felt he should have been given more of the platform.

The play also got me reflecting on my own practice as a writer and the enduring problem of using other people’s stories. I’ve just submitted the final draft of my forthcoming novel Black Car Burning (Random House, 2019 – gulp!) which deals with the aftermath of the Hillsborough disaster. Without a personal connection to Hillsborough, I felt uncomfortable about attempts to evoke the trauma of 1989 and accusations of ‘disaster tourism’. In the end my (no doubt unsatisfactory) solution was to embed my own research process into the novel by having one of the characters (an ex-policemen with PTSD) reading the same articles and court cases that I’d immersed myself in. In that way, I felt I wasn’t trying to ‘imagine’ Hillsborough, but rather imagine someone excavating a troubled past. What we write about is a moral choice and it carries responsibilities. But those responsibilities shouldn’t put us off from trying to tackle prescient issues in a variety of different ways and I admired Paradise Road’s compelling treatment.

One thought on “Art and asylum”

Poet, climber and trail runner. Author of 'Division Street' and 'No Map Could Show Them' (Chatto & Windus) and editor of 'Lake District Trail Running' (Vertebrate). This blog will mostly be full of pop psychology, poetry and thoughts about bodies and body image.
%d bloggers like this: